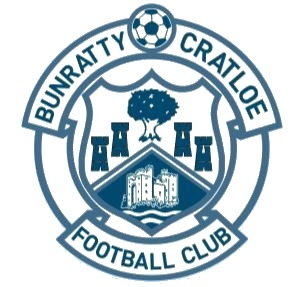 A wet and windy Roslevan hosted a highly entertaining match between our U13’s and Avenue Utd in a top of the table clash.

Bunratty Cratloe had the better of the early stages creating a number of chances the best of which saw Sean McInerney hitting the crossbar with a header.

Avenue‘s counter attacking game is strong however and they created a number of chances before scoring two goals before half time leaving our lads with a mountain to climb into the wind in the second half.

It was tit for tat in the third quarter but Bunratty Cratloe were slowly getting back into the game and eventually their efforts were rewarded by a goal from Matt Jones. By now we were putting on all the pressure and were unlucky not to score a number of times.

Avenue for their part remained dangerous and still kept Ryan Rooney on his toes in goals. Patrick Hannon in particular getting some vital tackles in.

With 6 mins to go we earned a penalty after good work by Tadgh Lohan and Conor Strogen. Kyle Kirby tucked away the penalty for 2-2. Within a couple of minutes Avenue broke again with a controversial tangle outside the box leaving an open goal for them to go 3-2 up.

The last word was left to our boys who went back up the pitch and created a couple of openings, one of which was confidently stuck away by Harry Strogen after a good ball in by Cian O’Gorman.

Our Under 12 girls capped off a great first season in Cla...