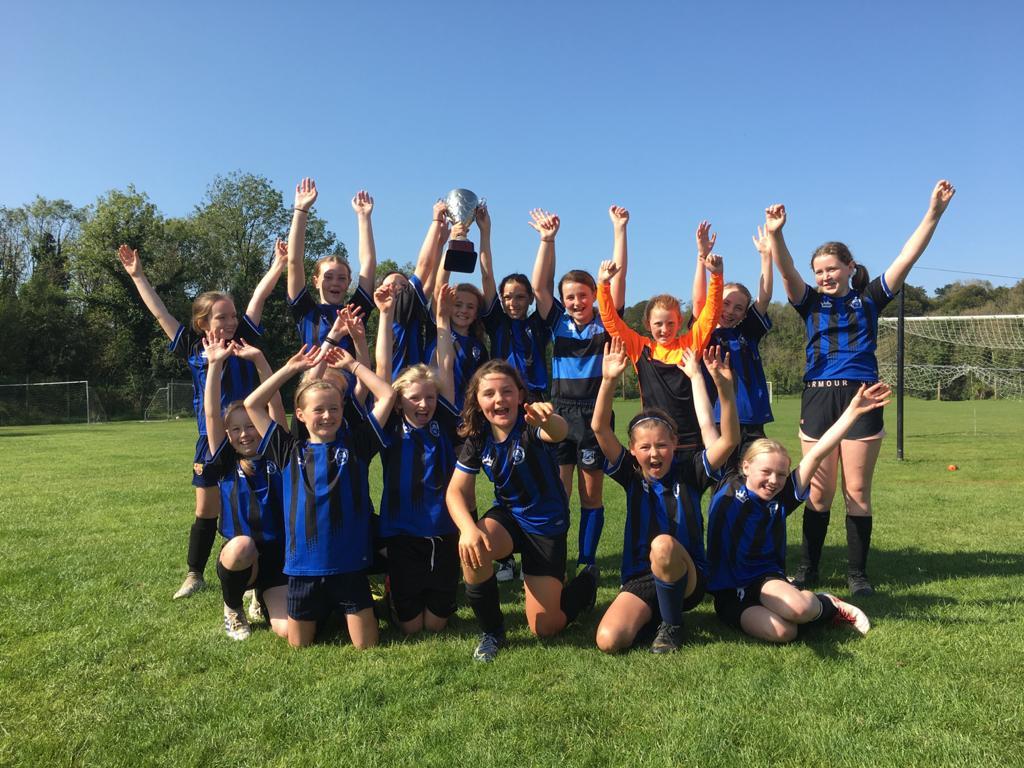 Our Under 12 girls capped off a great first season in Clare soccer with a victory over Tulla in the U12 Division 2 Cup Final. The game was played in Tulla on Sunday after an U10 girls blitz ensuring a festival of football atmosphere for the day!

Despite missing Ruth Enright and Muireann Earley, we still had a strong panel (if a little young with some of our U10's staying on to play). The match was exciting from the first to the last minute with Tulla starting stronger, going 2-0 up with goalkeeper Emma Jones having a good game keeping the score to this. Our girls were growing into the game however and Mia Carroll brought it back to 2-1 with a fantastic finish justifying her lobbying to be moved to centre forward! Tulla extended their lead to 3-1 and things began to look like they were going against us again but spirited performances from Kate Jones, Cara Power and Beth Cusack saw the tide begin to turn and Mia Carroll scored again just before half time with a great volley.

Christy Power's tactical acumen on the sideline oversaw a great move putting Abbie O'Gorman into goals for the second half bringing Emma Jones outfield. Abbie kept a clean sheet for the second half and her safe hands and bravery were the foundation stone for a change in fortunes for our girls.

Mia Carroll (again!!!) struck with a delicate flick from a corner that flew high into the net to equalise. At this stage the game was very much 50:50 with both teams pressing and fighting for every ball. Martha Cusack, Kennedy Hughes, Cara Earley, Kate Kearney and Hannah Boyce all did stints up front with Mia battling and pressing the Tulla defenders as if their lives depended on it.

A goalmouth scramble from an inswinging Emma Jones corner put us into the lead for the first time and from then on it was a fight to the finish with the volume increasing across both sets of supporters with each kick. Our younger players had a vital role in closing the match out with U10's Grace McNamara, Ailbhe Halpin, Lucy Lohan and Caoilfhoinn Earley all taking the field while our U8 star Kate O'Neill was kept in reserve in case we needed a goal late in the game.

The final whistle brought shrieks of joy and Clare League's Kevin Perill presented the cup to captain Kate Jones. The ensuing celebrations saw a parade of cars tour Bunratty and Cratloe beeping and roaring which may have been responsible for the spike in paracetamol intake in the locality that evening.

A big well done to all of our girls.

A wet and windy Roslevan hosted a highly entertaining mat...