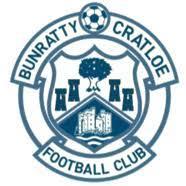 U12 GIRLS NATIONAL CUP - 2nd ROUND

Captain Lily Purcell led her team out today in wet and difficult conditions. From the whistle Lough Derg showed alot of strength mostly playing in our half. Special mention to Grace McNamara and Ailbhe Halpin who both were very strong in defence and also to Abbie O'Gorman in goals making some great saves. Made some changes at half time and the girls defiantly had a better second half. The Earley sisters (Cara & Caoilinn) putting pressure on up front and were very unlucky not to get a goal near the end. Score doesn't reflect the effort by the girls. All played well and fought to the end.

U14 GIRLS NATIONAL CUP - 2nd ROUND

Tough day out for 13/14 team lost 6-2 but doesn’t tell the story .. we started very well and had 2 or 3 chances before they got their rhythm. Emma pulled a muscle taking our second kick out and they scored ..she had to come off and they got another 2 quickly after that and it looked like a really tough day .. we got one back through a super move with Kate and Meia combining before Ella slotted home with an excellent finish. Unfortunately they scored very quickly again and despite really tough battling from the girls they got one more before half time . We tightened up at half time but conceded one more time almost 2 mins into 2nd half .. from there we bossed the game with brilliant interplay and skills from the girls . They really were excellent and it was a real shame things went so badly in first half … Loads of girls gave brilliant performances but Martha Cusack deserving of special mention showing unbelievable skills and composure proving that all her hard work in training is paying off… very proud of them lots of work to do before next season but we will enjoy our trip to Dublin next week first.

Juniors back in action

The long awaited return of football for the Clare Distric...

Best of luck to Kyle, Matt and Kate who are representing ...

We have three of our club mates in intercounty action thi...

BCFC Girls Club trip to Tallaght to support the Girls in ...